What you need to know

Taxpayers should breathe a sigh of relief as a much lower than expected R36bn in increased taxes was announced by the once-off Minister of Finance. The biggest news amongst the increases was the VAT rise of 1%. For the first time in 25 years, all South Africans will see most goods and services become a little bit more expensive thanks to the Value Added Tax rise. Although controversial, a VAT rise was much needed and will bring in almost R23bn in additional revenue to plug the gaping hole left in our economy.

In the last week, South Africans were treated to their 5th democratically elected president, growth forecasts and confidence in the economy has shot up. The minister announced a changes to the forecasts for GDP growth in the next 3 years which is good news for future tax collection. South Africans were thus treated to a budget which could have been worse, but thankfully was not. Taxpayers should continue to do the right thing and pay their taxes each year so that the big pains do not occur in the future. The 2017 budget was a killer to our pockets, 2018 got away with being more of a large burn instead. 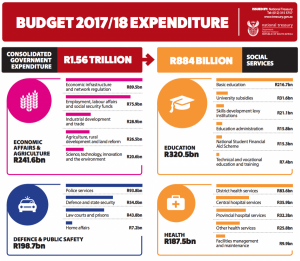 The ills of unemployment and poverty still exist in our country and the minister was able to announce a greater than inflation increase to social grants for 2018 onwards. Given the VAT rise, how much of this will be lost remains to be seen.

The minister could not give taxpayers any real good news in the 2018 budget, but with a new president and a renewed focus on getting the economy on the right track, maybe some good news will come in the future. On to the bad news however:


Individuals, earning qualifying income above the new tax threshold of R78 150 (previously R75 750) will be paying increased taxes of R6.8bn (previously R16.5bn in actual tax increases) for the next tax year, most of this will be for high income earners however. Although you will see a slight bit more money on your payslips each month from 1 March, this is lower than inflation and so you actually will not be benefiting. It could have been a lot worse so we thank the minister for this.

Taxpayers whose marginal rate of tax is below 31% will feel the smallest effect of the effective tax rises, however taxpayers paying above that rate will feel the biggest pinch.

Capital Gains Tax
Surprisingly to us there have been no changes to the CGT inclusion rate in this budget. This is good news to those investing money or selling assets. Individuals still have to include 40% of the gain in their income while companies and trusts still have to include 80% of the gain into their income. Overall maximum rates 18% (18%) and for companies and trusts to 22.4% (22.4%) and 36% (36%) effectively on the gains made.

Dividends
Luckily there was NO increase in the Dividends Tax rate, so let’s all breathe a sigh of relief at the maintained 20% withholding tax rate.

Estate Tax and Donations Tax
The minister had to look for more money from taxpayers, and the first place to look will always be from the wealthiest. Donations Tax, for all amounts over R100 000 and up to R30,000,000 in total per year, will remain at 20%. However, the amount of donations exceeding R30,000,000 will now be taxed at an increased rate of 25%. Remember that donations between spouses are still tax free!

The Estate Duty threshold above R3.5m will still be taxed at 20%, however for those HUGE estates over R30m, they will now be taxed at 25%.

Interest and investment exemptions
There have been no changes to the interest exemption thresholds staying at R23 800 for those under 65 years of age and R34 500 for those over 65. Tax free investments, which means no Dividends Tax, no CGT and no Income Tax for investments are still capped at R500 000 over a lifetime will keep its annual limit of R33 000.

Medical Tax Credits
You and your first dependent will be allowed a tax credit of R310 (previously R303) and thereafter R209 (previously R204) for all other dependents. Fortunately the minister has not announced that the medical tax credit will be scrapped, not yet anyway!

No changes on the taxable rates of lump sums and the Retirement Laws which allow Provident Funds to be deductible alongside Retirement Annuity and Pension Fund contributions remain the same. The regime allows for a capped 27.5% of the greater of Gross Income (so all earnings) or Taxable Income (income after deductions) to the max of R350 000 per year.

These rates have moved by a whopping R168 (previously R52) less tax payable for businesses who earn less than R78 150. We still feel that Small Business’ are not being looked at properly and deserve some better tax treatment!

Sin Taxes
Those “sinners” amongst us are going to be hit massively as part of an R5.79bn (previously R5.1bn) tax increase on this type of activity. Wine will now set you back between 23c and 73c (previously 26c and 70c) per litre more while beer and spirits will now cost 15c (previously 12c) and R4.80 (previously R4.43) more respectively. Ciggies, a pet hate of government, will now cost you an extra R1.22 (previously R1.06) per packet.

Road accident fund levies have increased by 30c (previously 9c), but unfortunately we will be paying more for petrol and diesel as fuel levies have gone by 22c a litre (previously 30c) per litre from 1 April.

The much anticipated Sugar Tax being introduced from 1 April 2018 is forecast to fetch R1.93bn in revenue for the government. No more cokes and sweets South Africa.